New tractor for the team at Dalton Park

Our team at Dalton Park were delighted to take delivery of their new tractor today which is a key resource for them, particularly for the waste team who deliver an outstanding service on site with their very efficient waste segregation and recycling works.

Stephen Watson, one of the main users of the tractor on site, is shown in the picture with the nice, new shiny tractor and its much older predecessor in the background. 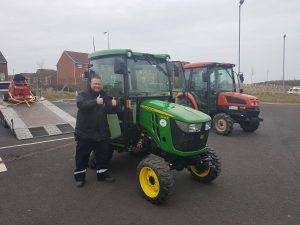 The new tractor will provide improvements in operator comfort, reliability, efficiency and general all round performance and, alongside the cleaning equipment solution, is the next step on the journey towards service excellence on site.

Dalton Park in County Durham is the biggest outlet shopping & leisure centre in the North East, with over 70 shops & restaurants selling over 200 brands. Key tenants include M&S, Next, GAP, Adidas & Cineworld.

Dalton Park also has a number of coffee shops and restaurants including Starbucks, Thornton’s, Frankie & Benny’s, Pizza Express as well as drive-thru McDonald’s and KFC units.

Built on a former colliery spoil site, Dalton Park opened in April 2003. Following the investment made by new owners who purchased the scheme in 2015, significant investment has been made in the development of Phase Two which includes a Cineworld, a number of restaurants as outlined above and standalone family public house on a long leasehold to Marston’s PLC. This phase opened in 2016.
The scheme now comprises 68 retail units, 11 cafes/restaurants/bars, a cinema complex, 1,700 car parking spaces and boasts 2.6 million visitors every year.

Realm Limited are the asset managers for the scheme and were appointed by the new owners in 2015. Following the successful completion of Phase Two, Realm worked closely with their client to develop plans and deliver a significant upgrade to the outlet mall in 2017. This is included new paving throughout, Trespa panelling to the shop fronts, new mall furniture and signage a well as improved landscaping and lighting schemes and also included a full refurbishment of the public WCs.

Alongside the shopping centre, the former colliery spoil was sculptured to provide 55 acres of landscaped parkland with three signposted walks and various wildlife habitats.

Back to Latest News